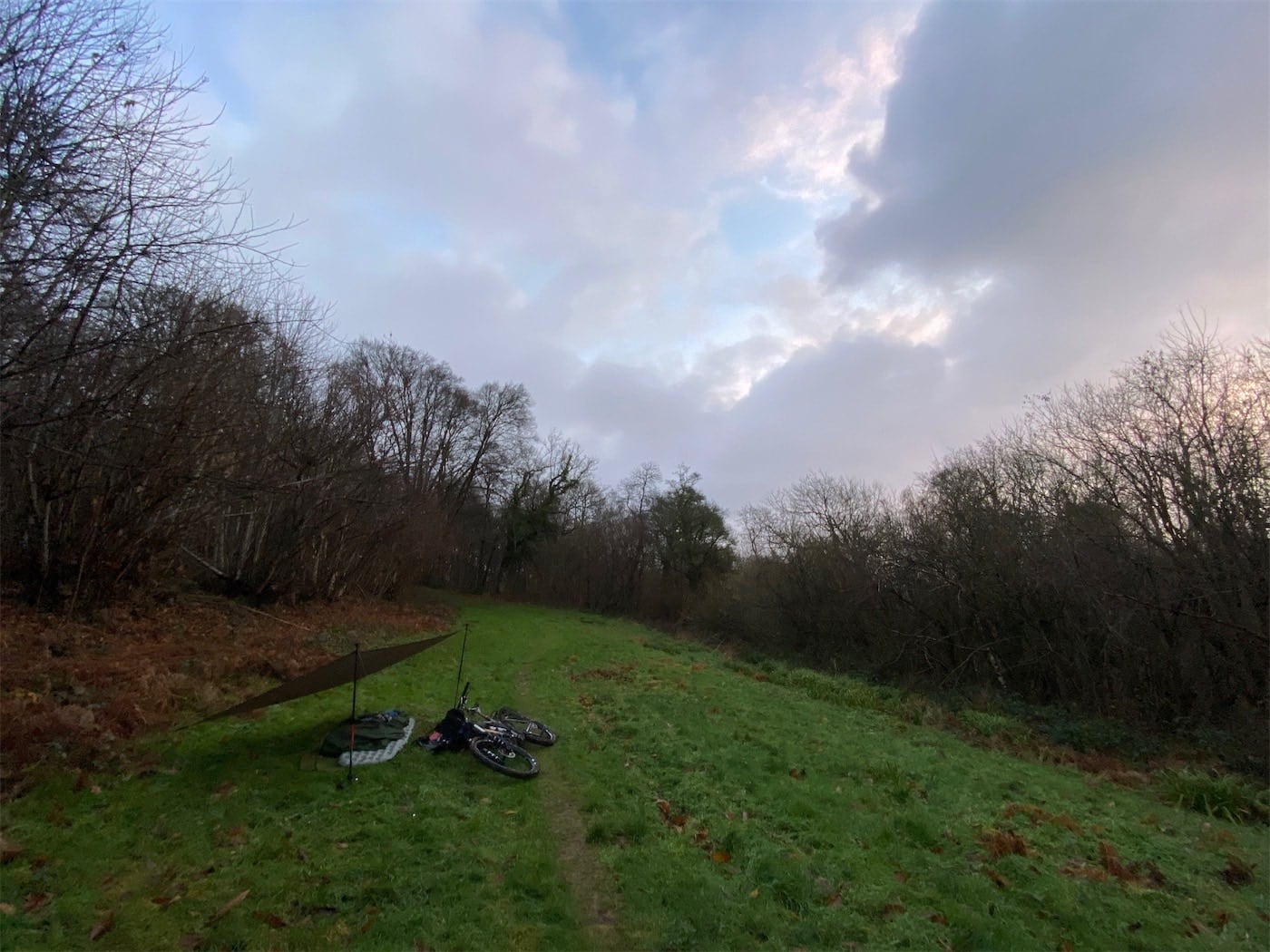 Thanks in equal parts to the Bear Bones Bikepacking forum (for the Bivy A Month concept) and Alastair Humphreys (for an increased desire for doing silly things) I found myself sleeping in a field on a dark, wet and windy January evening…

After umming and ahing for a while about whether to go local or 'make it worth it' by going slightly further for I decided to be sensible and stray no further than an hour away from home (which, spoilers, proved wise).

I live in Kent, so while there's no mountains, or wide expanses of nature, there are pockets to be found. An OS map is a valuable resource for finding likely spots.

I set off mid-afternoon along a route I've ridden many times on day rides, this time with all my bikepacking paraphernalia attached (it took longer to gather all the stuff and pack it on my bike than to ride from my house to my camping spot!). 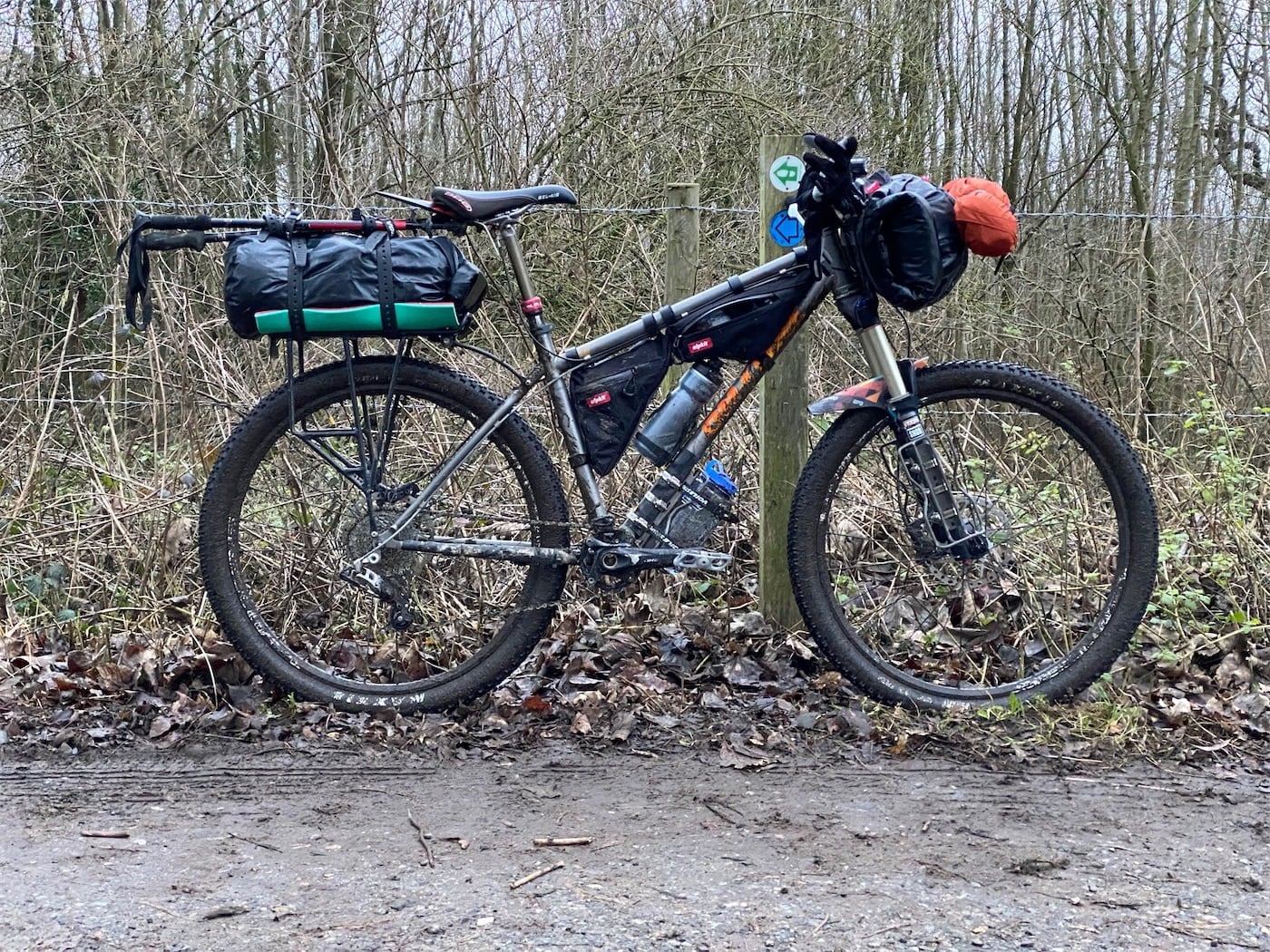 Rain was forecast and the day had been grey. I managed to stay basically dry on my hour long ride, between the rain not making an appearance and going gingerly through puddles. I'm not averse to getting wet and muddy, but won't seek it out if I can avoid it! 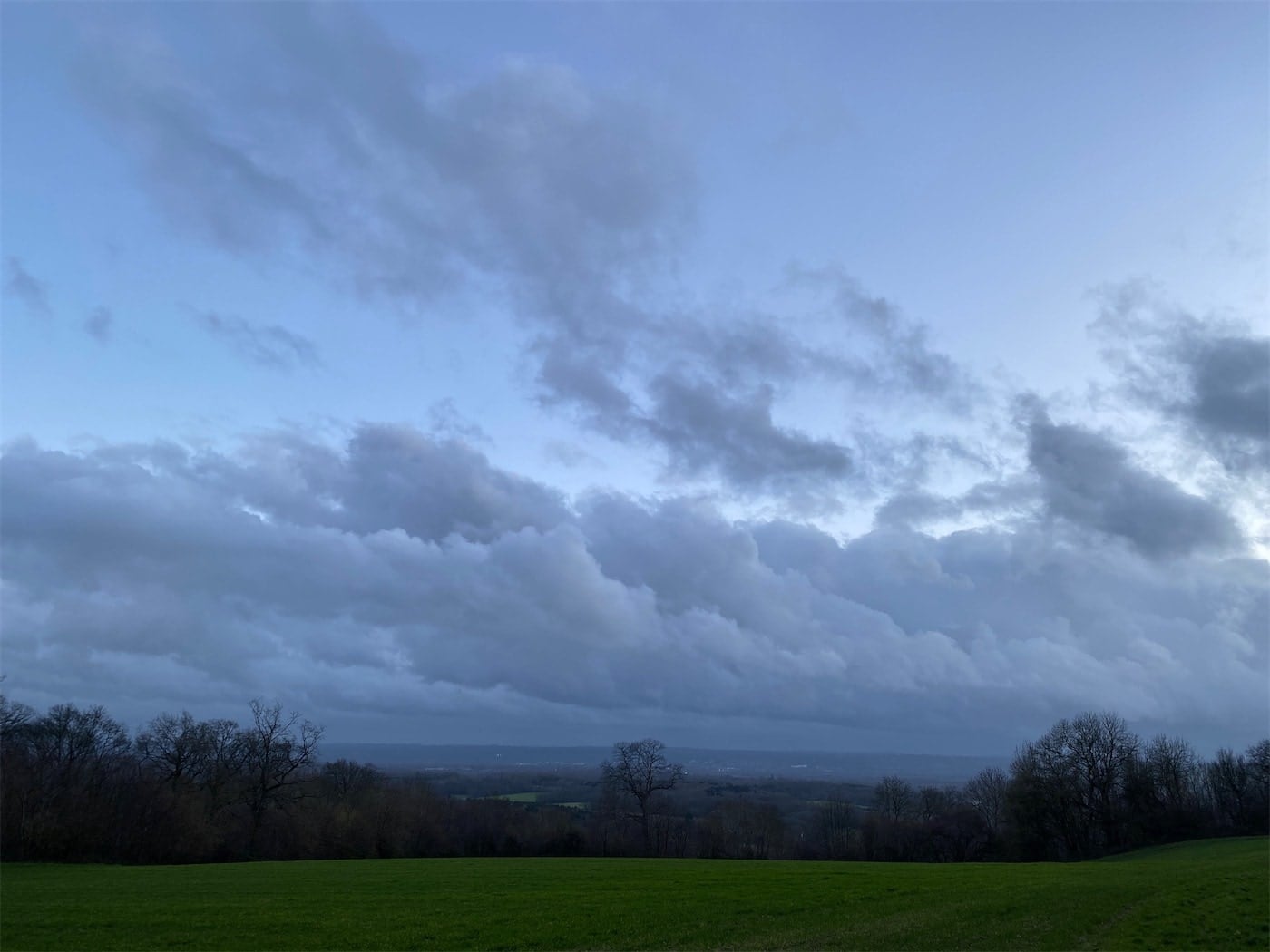 This was also my second wild camp and first time bikepacking in winter (also my first time using my tarp outside of a couple of practice pitches in the garden), so I didn't want to make things harder for myself by getting wetter & muddier than I had to!

I got to my chosen location just after dusk, pushing up a steep grassy bank to a tucked away corner in a field.

Happy with my person sized area of flattish ground I'd found, I stood for a while, getting used to the sounds and wondering if I'd be likely to be seen.

I unfolded my chair (just because I'm sleeping in a field doesn't mean I can't be comfy) and pondered for a while.

I began to think I'd got off lightly so far, the rain hadn't come and my chosen spot was nice.

Then the rain came.

Even in the semi-darkness the rain was so heavy the visibility dropped instantly. This was big, heavy, soaked through to the skin in under a minute rain.

Fuck you, smug me from 30 seconds ago.

I pulled my tarp out of my bag and pulled it over my head as a makeshift poncho, the wind doing its best to relieve me of my shelter.

Here I was, less than an hour away from my home, in Kent, being reminded that being close to home won't stop you getting caught out.

I began to feel coldness spreading down my back and came to realise that my makeshift poncho hadn't gone over the back of my seat like I had thought and was instead caught up and was funnelling water down between the chair and my back – wonderful.

Two reaches out from under the poncho and I'd gained a head torch, the cord for my guy lines and wetter arms. Cue a frustrating ten minutes (or however long, I have no idea, it felt like forever) trying to attach the cord to the loops on the tarp with it draped over my head obscuring the light from my head torch as it flapped in the wind.

Fast forward a bit and you'll find me reaching increasing levels of frustration and the beginnings of quiet despair while I search for a missing tent peg as it continued to rain.

Eventually I found it, not at all where I thought it was – thanks two minutes ago me.

After (quite) a bit of faffing I got the tarp set up using a couple of walking poles. I lowered the side facing the wind down a bit and sat under my shelter for a while just grateful to have some. 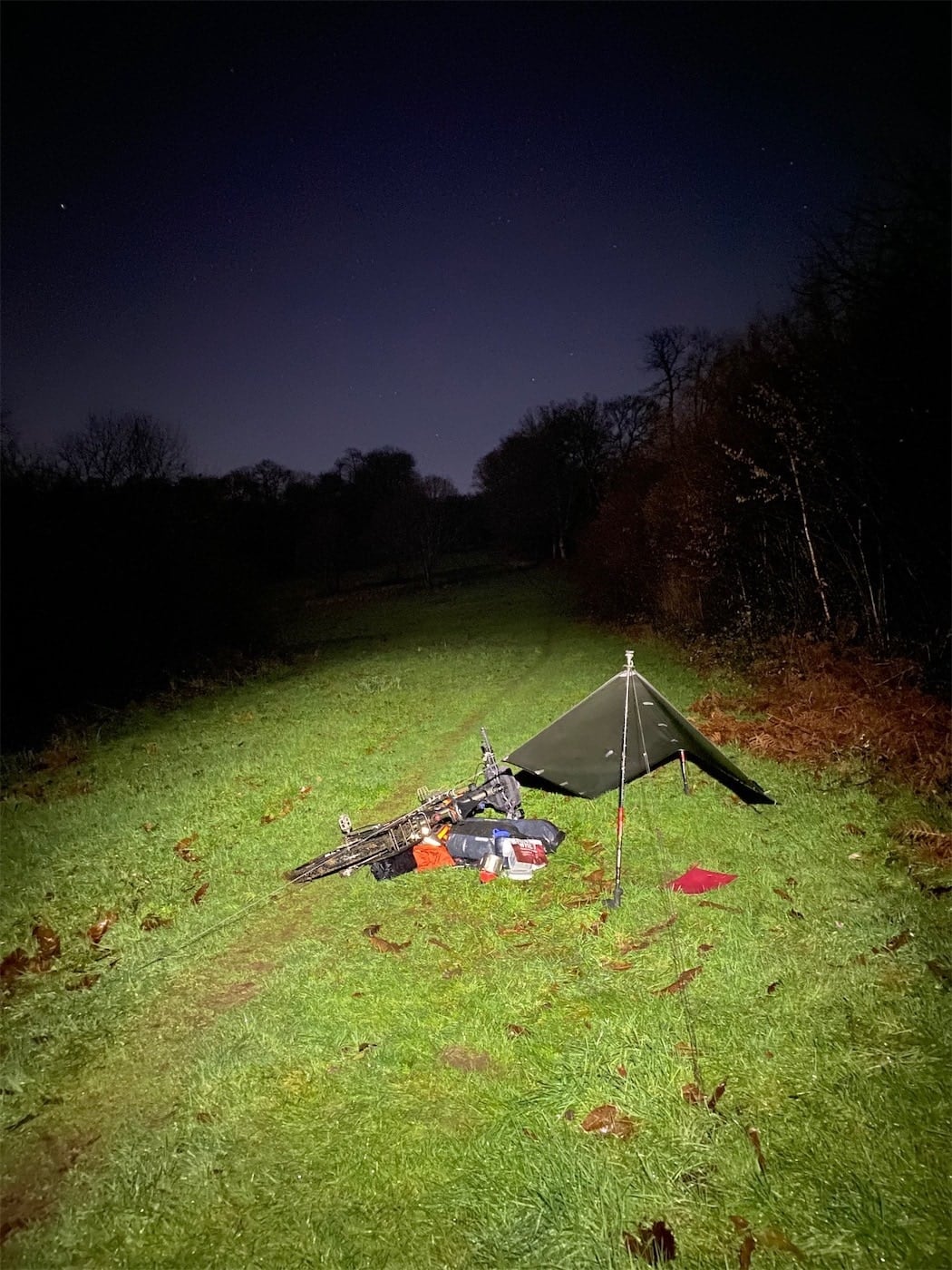 Dinner was instant mash with chunks of cheese & chorizo stirred in.

I was in my sleeping bag by about 7pm, so with not much else to do and rain still falling I laid down to sleep.

The clouds passed and the full moon shone.

Eventually I drifted off and slept for a while. I woke up, forgetting that the moon was out and thought it must be near dawn – how wrong I was! I fished out my phone from somewhere in the bivy bag/sleeping bag/liner mess and found it to be just 9pm – this was going to be a long night.

I figure I must have slept a single cycle at a time, finally having to shuffle out of my warm cocoon at 5am for a cold wee. From there I made it another couple of cycles until just before sunrise at 8am.

I sat up and faffed with layers, colder and damper than I’d have liked. I faffed with wet bags and got water warming for coffee.

I’d brought some premixed overnight oats with me but hadn’t added enough water the night before, so the result was very thick.

The coffee was at first barely warm due to impatience and then scalding hot thanks to another minute on the stove.

It was also weak, thanks to some of the sachet sneaking its way out through a hole that got punctured through the packet. But it had a welcome warming effect nonetheless.

The rain continued on and off while I packed up and got on my way. 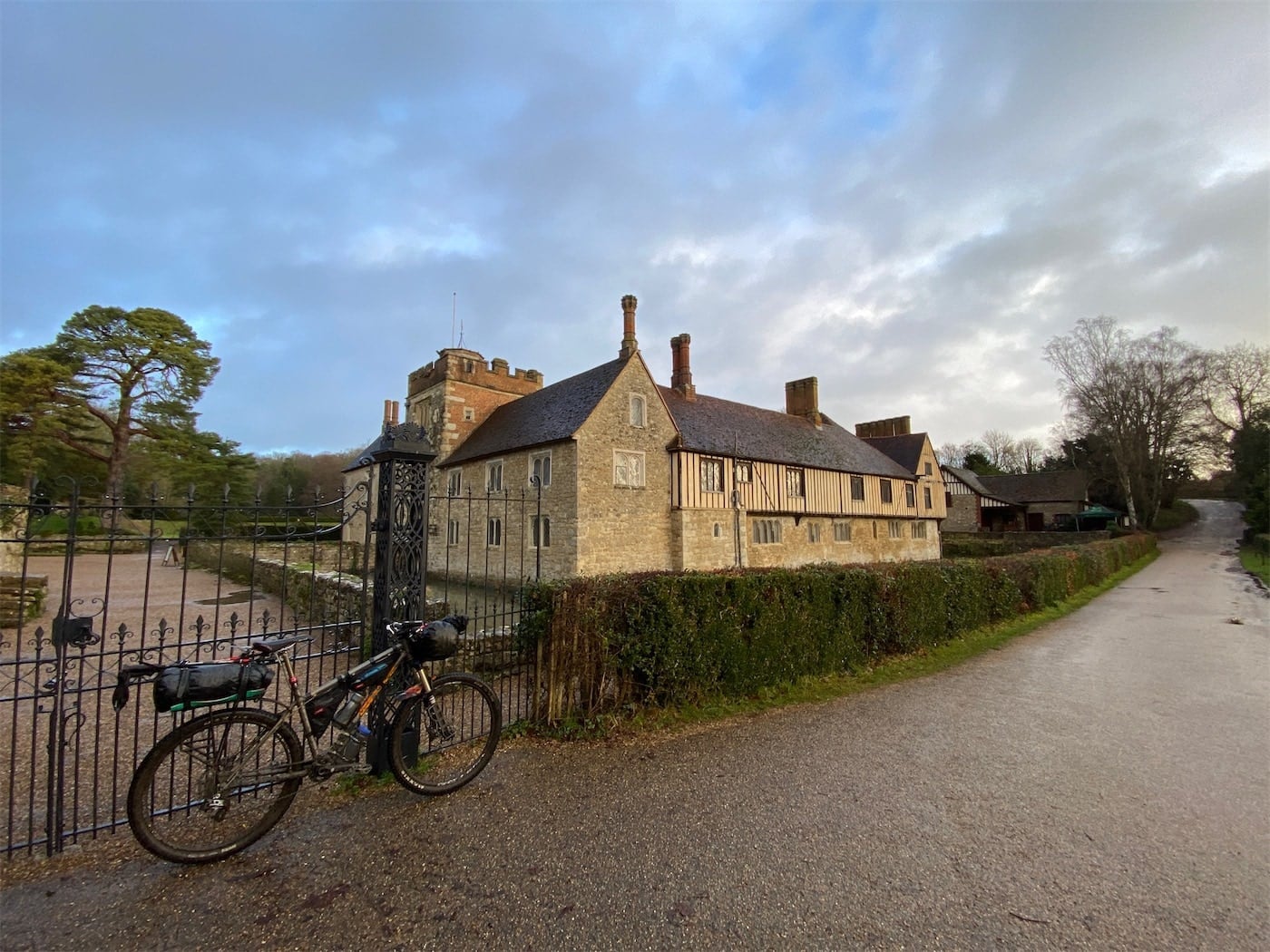 A short off road ride and a bit of tarmac later I was home, washing my bike and taking over half the house hanging all my wet kit out to dry.

A recent purchase of a boot/shoe dryer was put to good use and proved very effective — drying my shoes in hours instead of days!

Can’t wait to do it all again next month!