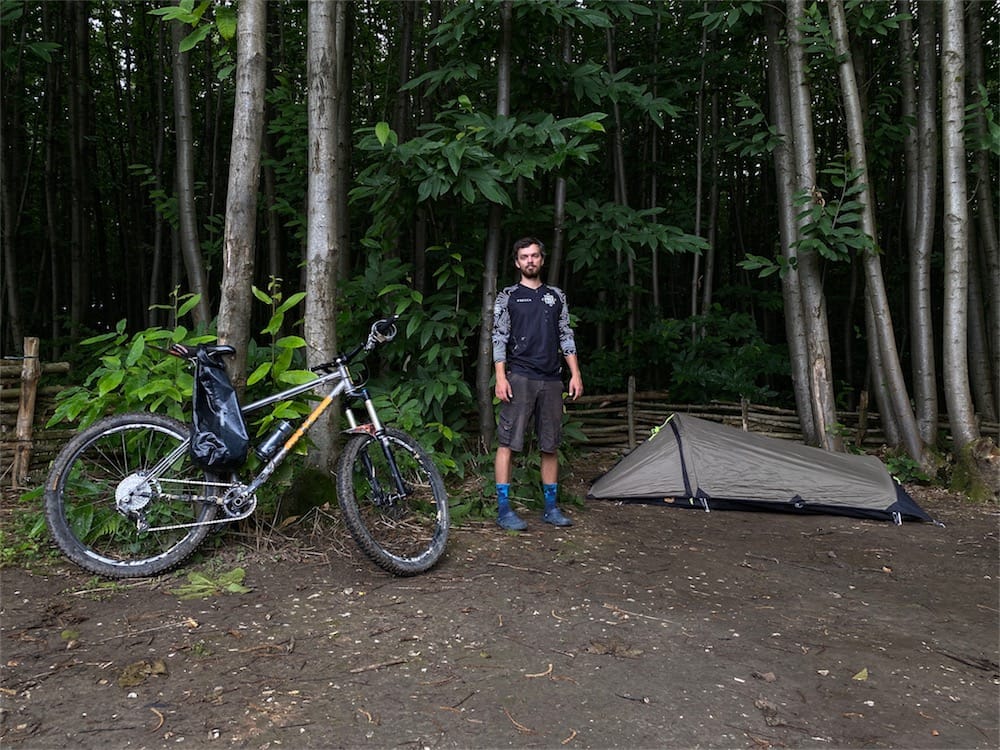 Bikepacking. It's something I've been meaning to do for a long time, as I love riding bikes and I enjoy camping. And I already had all the kit I needed to get out and do it but never had done.

I think a big reason I'd never done it was because I thought I had to do it in a big way, like spend a week traversing Wales or something and could never quite commit the time or energy to doing it.

I've spent a lot of time at home recently, like many people. With the added bonus of having had a baby during the first lockdown and struggling to keep a baby alive and happy while barely being allowed out the house or to see anyone.

As things started to get back to normal I went out on a few road rides with some of my wife's colleagues, many of whom I've met many times before as she gets along very well with them.

After seeing that some of them had gone on a bikepacking adventure I was like "fuck it, if they can just get out and do it so can I". I thought to myself that I'd been missing out because I'd been waiting to have a big adventure, but small adventures can be awesome in their own right.

I'd booked some time off work a while ago with little planned at the time – so I decided to go bikepacking!

I found a campsite a mere 30 minute drive away from our house in Kent. I looked at a few and used Komoot to plan a route between each of them, just point to point, to give an indication of how good the route would be.

I found that Badgells Wood Campsite provided the most amount of off road, even more so once I added some way points and took a slightly more circuitous route.

From my front door I ended up with a route that was over 50% off road, with most of that being actual dirt and some gravel. I was very pleasantly surprised, I was expecting to spend much more time on the road, given the area I live in and that it's a route just from my front door.

I'm lucky to own more than one bike and so had some options. Having found such a good route I opted for my first choice – my hardtail mountain bike. I will almost certainly go bikepacking on my road bike at some point and may even try in on the single speed!

I didn't do an awful lot of research before going, but what I did look at quickly led me to the conclusion that many people struggle with the packing light aspect, at least at first.

Thankfully this wasn't too difficult for me, as I've previously spent a year living out of a carry on back when my wife and I went travelling. So instead of starting with a big list and having to get rid of things I started with a blank list (literally yes, but I mean figuratively) and only added things that were essential.

I pretty much landed on my final packing list straight away as I was only going for one night so it didn't matter much if I missed something except for the bike, a helmet and the tent – pretty much everything else was optional and at the worst my wife could pick me up in half an hour or less.

While I had all the kit I needed none of it is 'ultralight' by any stretch so while it's perfectly good stuff it's not as small or light as it could be. 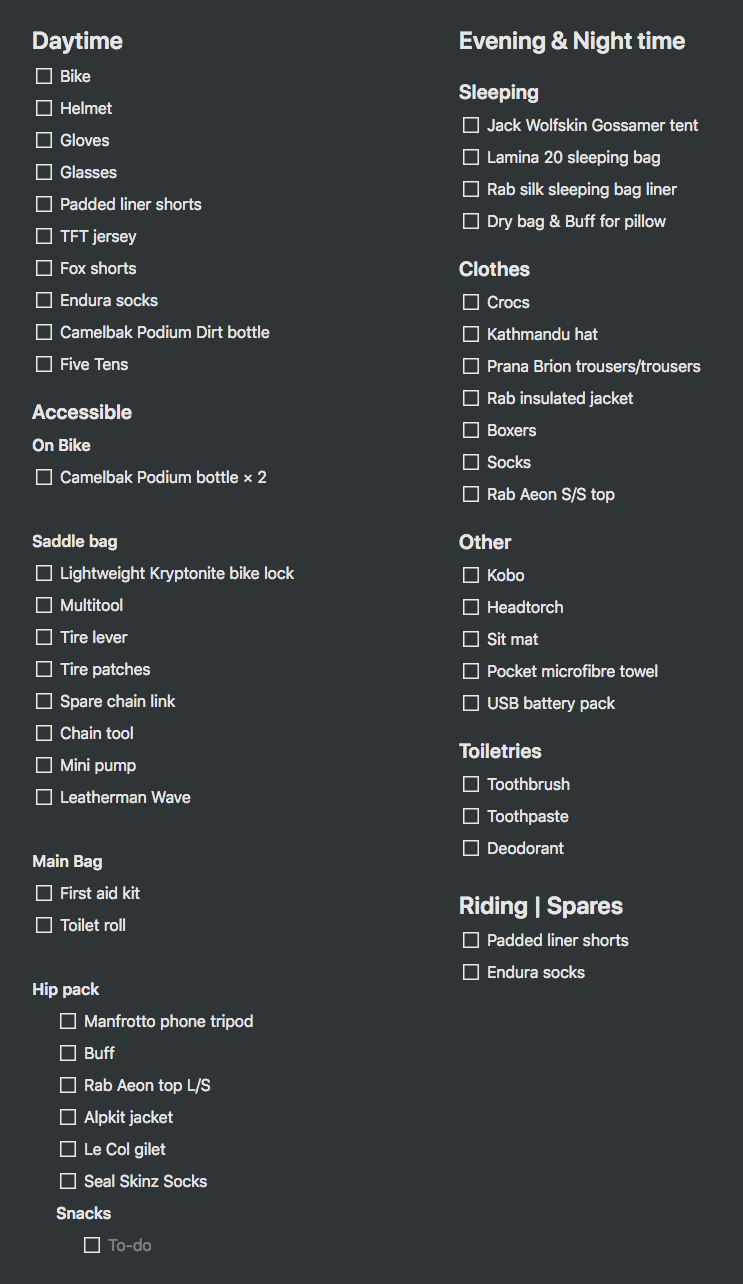 I debated taking a stove, as I assumed I should do, but in the end I left it at home as our pans are quite big and I took some pre-cooked food for dinner.

I took an assortment of snacks like cereal bars and stuff, both for snacks and for breakfast. My wife got me some cookies from Sainsburys, which are always appreciated (I was shocked to see the reviews online are so mixed!).

I decided I didn't want to spend any money other than for the campsite on at least my first bikepacking trip so I didn't have any bikepacking specific bags to pack stuff in.

Most things went into a rucksack, an Osprey Talon 33.

The bike specific stuff like tools etc went into an ageing saddle bag, strapped inside the front triangle of my frame (my mudguard prevents it from going under the saddle).

My tent and sleeping mat went in a heavyweight drybag from Ortlieb which I strapped pretty much straight to my handle bars with some random straps. I put some old bar ends underneath to try and stop it flopping around too much and was pretty happy with how it all held together – especially as I neglected to actually try it out while moving before setting off. 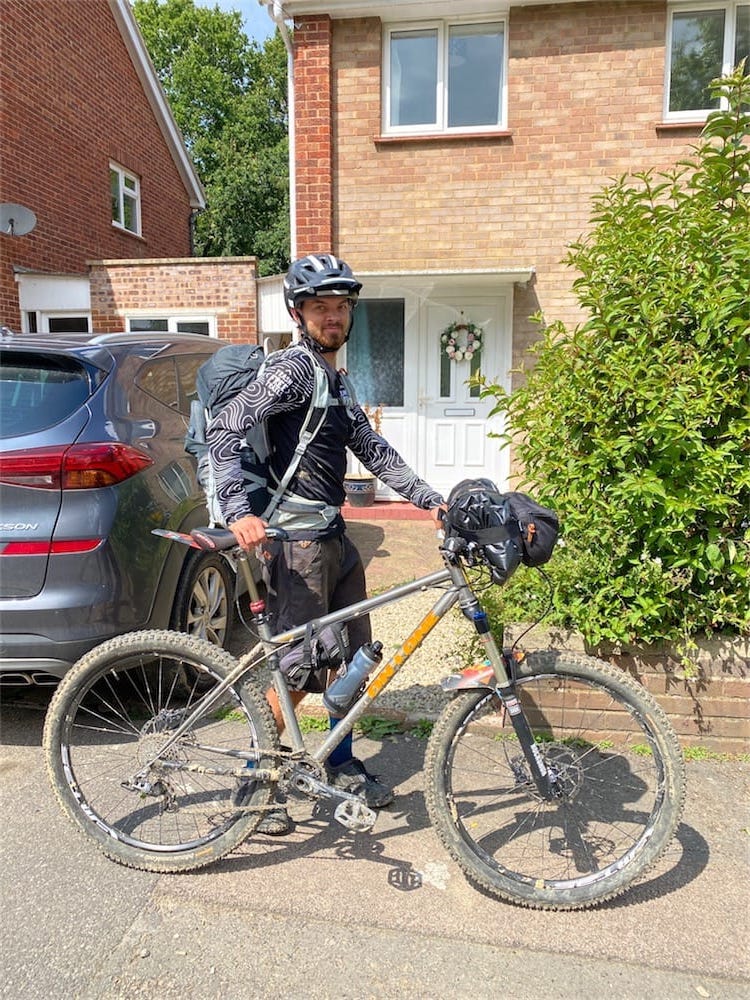 I lashed a small hip pack/bum bag over the top of the handlebar bag for quick access to my phone, extra layers and snacks. 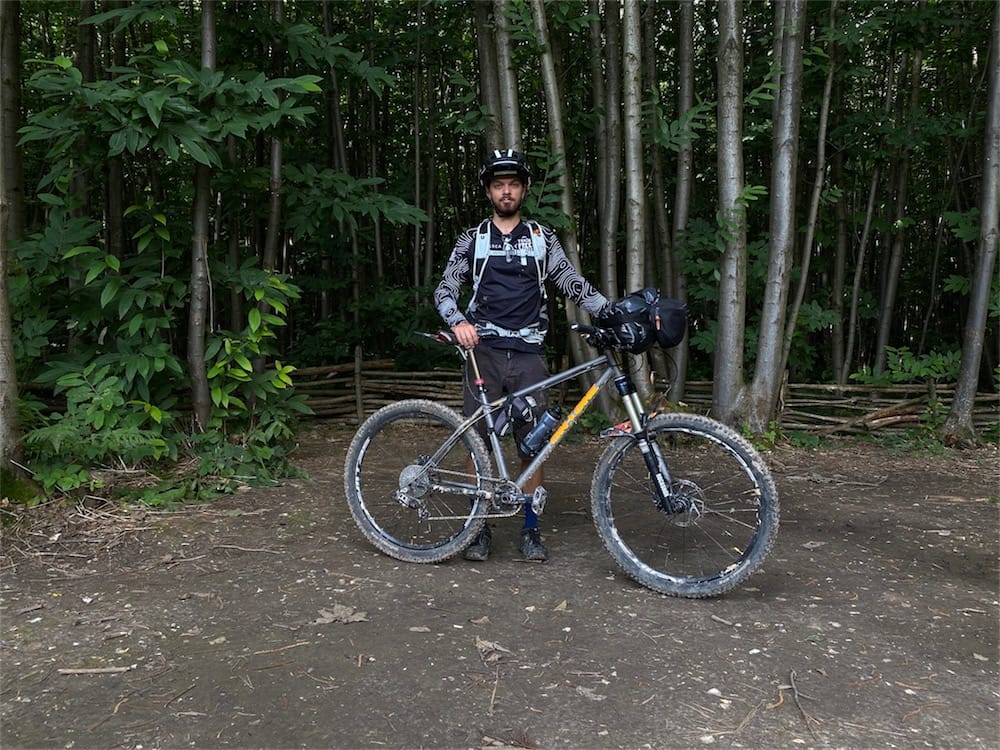 About a week after first thinking about it I set off, pedalling away from our house with, what felt like, stuff strapped all over the place.

Roughly the first half of the route I was already familiar with, as it was so close to our house I'd already explored nearly every available path that allowed bikes. That's not so say it wasn't good – it certainly was.

It was weird riding trails I'd ridden so many times before, this time with a huge backpack and stuff strapped to my handlebars, on my way to a campsite. 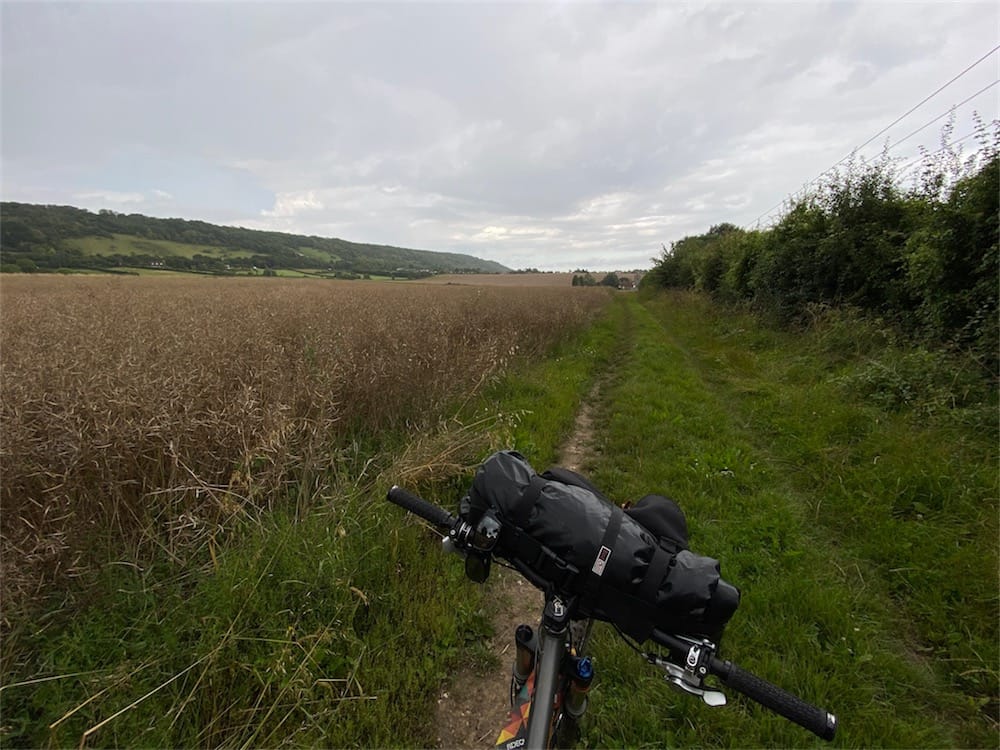 While none of my route was mountainous or any kind of technical single track there were some bits that tested me, mostly thanks to copious amounts of mud. One particular muddy section was on an uphill section of bridleway and I have no idea how I managed to get through without putting my feet down – I would have struggled without all the bikepacking stuff! 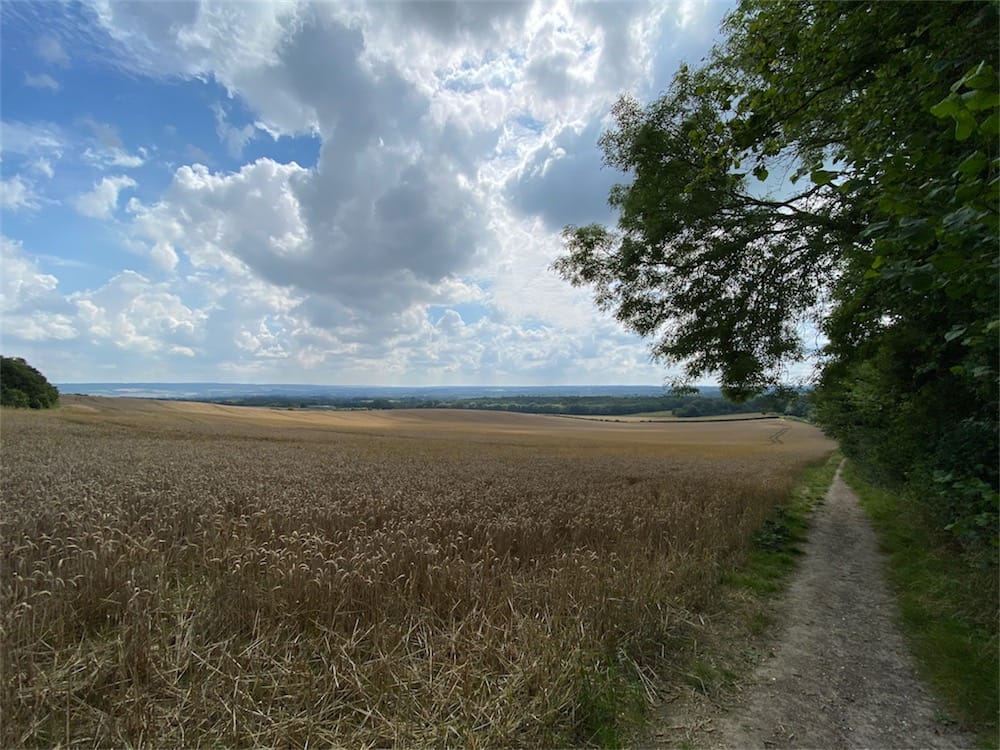 I used the hip pack strapped on top of my handlebar bag often, pleased with my stroke of relative genius. As I don't have a dedicated GPS, or a mount for my phone it was super useful having a quickly accessible location for my phone to check the route.

As familiar as I was with most of the route I had to go 'off piste' several times thanks to impassibly muddy/wet sections of track in a forest. I could have got through if I needed to, but there is such a network of paths in that area that I could just take a look at the navigation apps on my phone to guide me and show me how far off route I was going.

I planned the route with Komoot and tracked the ride with it, in addition I exported the GPX file to the OS Maps app and to Cyclemeter.

While the Komoot maps are detailed, it was super handy having the definitive mapping for the UK to look at as well, the OS Maps give such a wealth of information, particularly about public rights of way that just aren't as clear on Komoot. Cyclemeter wasn't for navigation, but just for recording the ride.

Three apps is probably overkill and I plan to try and simplify it as starting and stopping each one is cumbersome, but they each provided a different function.

What a lovely hike

I made it 99% of the way without putting a foot down or walking the bike (except actual planned stops) until I reached the hill on which the campsite stood. I have a 1×9 set up on my bike which doesn't have a particularly large cassette, so my low gear isn't all that low. So after grinding away for as long as I could manage up a muddy, loose surface I finally gave in and got off to walk before I started to roll backwards.

Bagels Wood Campsite is in, somewhat unsurprisingly, the woods and pitches are well defined by deadwood fences (fences made from branches) which allow a lot of room for large family tents.

My little one man tent looked hilarious pitched as the edge of the area but after some faffing (I've had the tent for years but only used it once or twice) it was set up and ready to sleep in.

It was still pretty early once I'd eaten my dinner so I set out on an amble around the campsite, read and just sat until it got dark.

As I packed up the next morning and made my way back via the same route (which I'd forgotten to reverse and download for the way home, no big deal this time but a top tip to remember for next time!) I found myself already thinking about when I could do this again. 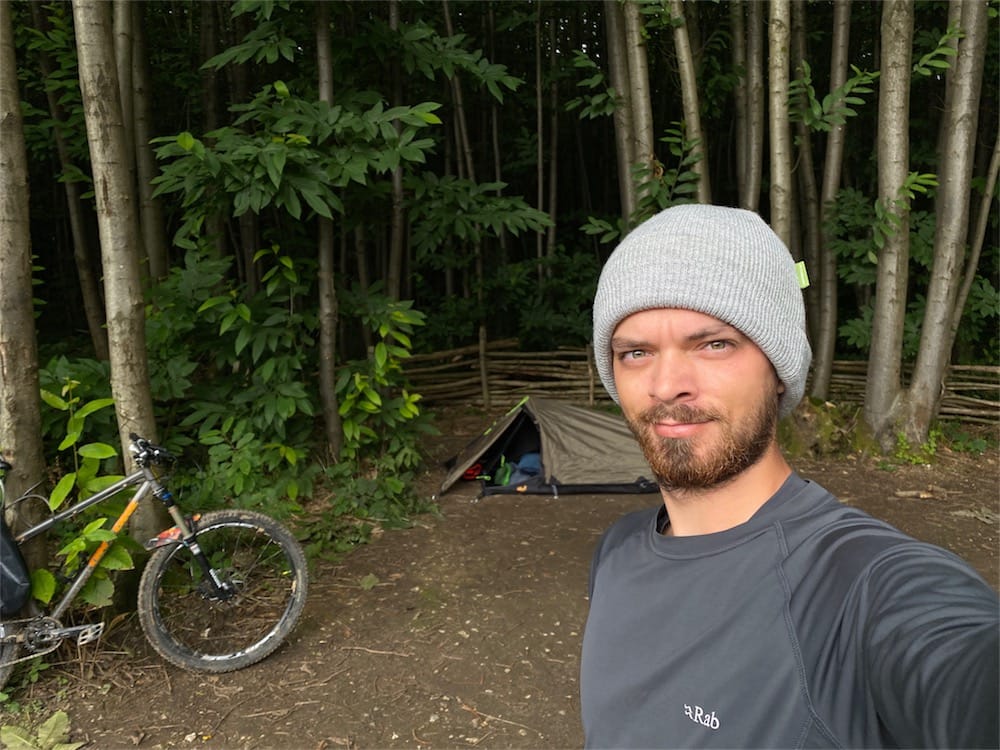 Thinking about when I could enjoy the feeling of freedom that comes with having everything you need with you, on two wheels. Riding a bike is generally a pretty freeing thing normally, but add on the feeling of being able to pitch a tent and survive alone in the wilderness and you feel pretty great, even if you're only an hour from home.

When I got home I almost immediately started looking at all things bikepacking. I got lost in a rabbit hole of bikepacking bags, kit lists, route planning and adventure for a couple of days much to my wife's chagrin.

I had made some notes on my phone about things that worked well, things that didn't, things to leave home next time and things to take or buy for next time which helped stop the "I wants" when I was looking at stuff. It really helped to have things written down to show what worked and didn't work for me, not for anyone else.

Clearly, you don't need any bikepacking specific kit to go bike packing, assuming you already have a decent bike (as in, it works, it can be any kind of bike suitable for your route) and some basic camping stuff like a tent and sleeping bag & mat.

I've already bought a handle bar harness from Alpkit, which I'll write another blog post about. Already it seems much better than my DIY method, which is unsurprising

I'm already keen to do a longer route, I'm thinking of the South Downs Way as my next bigger adventure.

And I'm already booked in for two nights at another local campsite, for another close to home mini adventure. The route to this one isn't anywhere near as good unfortunately, I think I found the best route to any local campsite the first time around, but that just means I'll have to go further afield – which is such a shame!