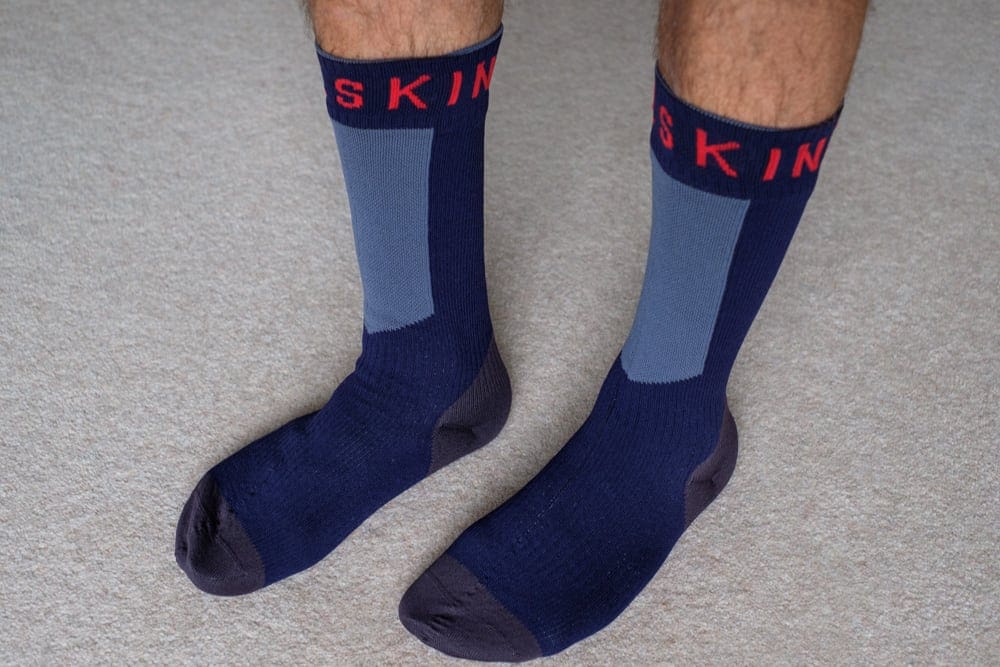 TL;DR: Better than they used to be and will do a good job of keeping your feet dry in most situations, but they have their limitations, which is to be expected.

I looked around for a proper review of Sealskinz socks, but didn't really find anything that seemed reasonable. The reviews on the Sealskinz website were (in a surprise to no-one) very positive, while also lacking much in the way of detail.

I found a couple of "reviews" on other sites that appeared as though the author had never actually laid eyes on the real thing and was just writing their review based on the product details they could see online.

One video on YouTube seemed actually useful, if a little roundabout.

So I decided to write my own review. Most of this review is probably true for most of the different types they sell, but it is about their "Waterproof Warm Weather Ankle Length Sock with Hydrostop" version specifically.

This isn't the first pair of Sealskinz socks I've owned, having tried them many many years ago to combat the rain and numerous puddles while mountain biking in Wales. Strangely, waterproof mountain biking shoes seem few and far between (for flat pedals at least). The pair I wore then were not very good at all and I remember giving up on them fairly quickly. While the sock material itself was perfectly waterproof in isolation, in use water would just run down into the sock and turn them into a wetsuit like affair.

The new pair have a "Hydrostop" feature, which is essentially a grippy band around the top of the inside of the sock which promises to reduce the issue of water running down into the sock. It's similar to the grippy material you get on many knee and elbow pads for mountain biking, and it can be prone to rubbing so don't go for an all day walk the first time you try the socks. Also, if you have hairy legs the grippy material likes to pull on these (the same issue I have with my bike pads). 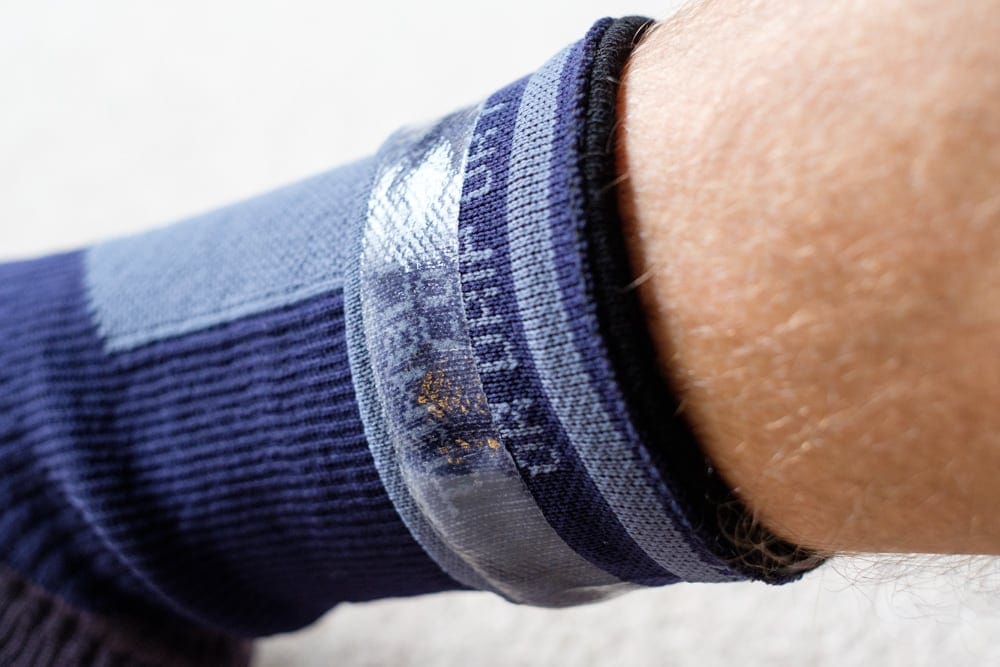 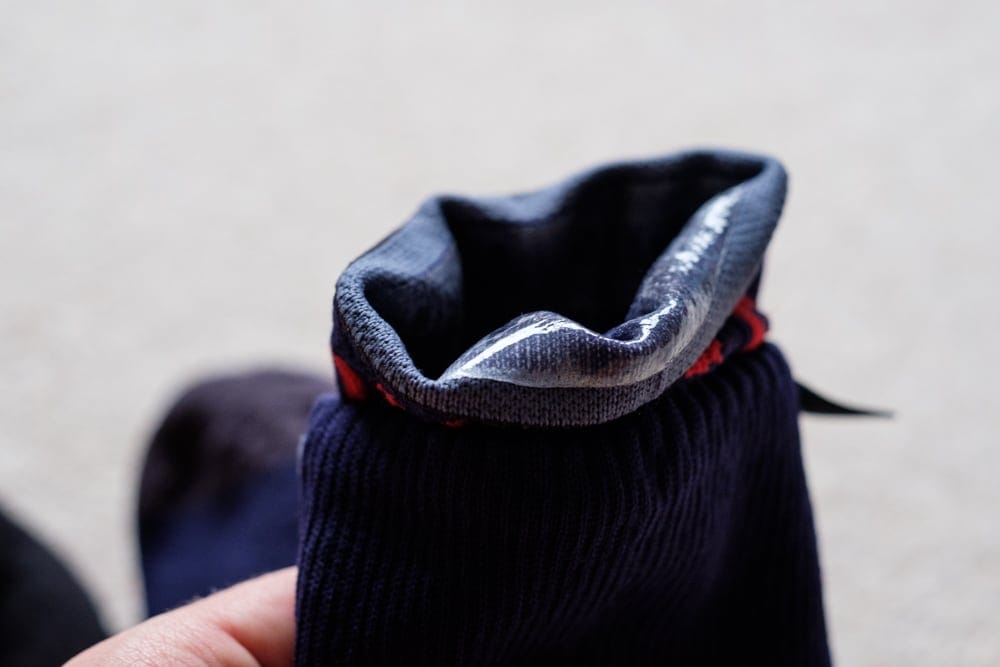 While not infallible by any means, this "Hydrostop" feature does go some way to preventing water getting down in to the sock. As does being reasonable about the exceptions and wearing something over the sock, to prevent the water being able to run down your leg and straight into the top of the sock, whether it be well sealed or not. 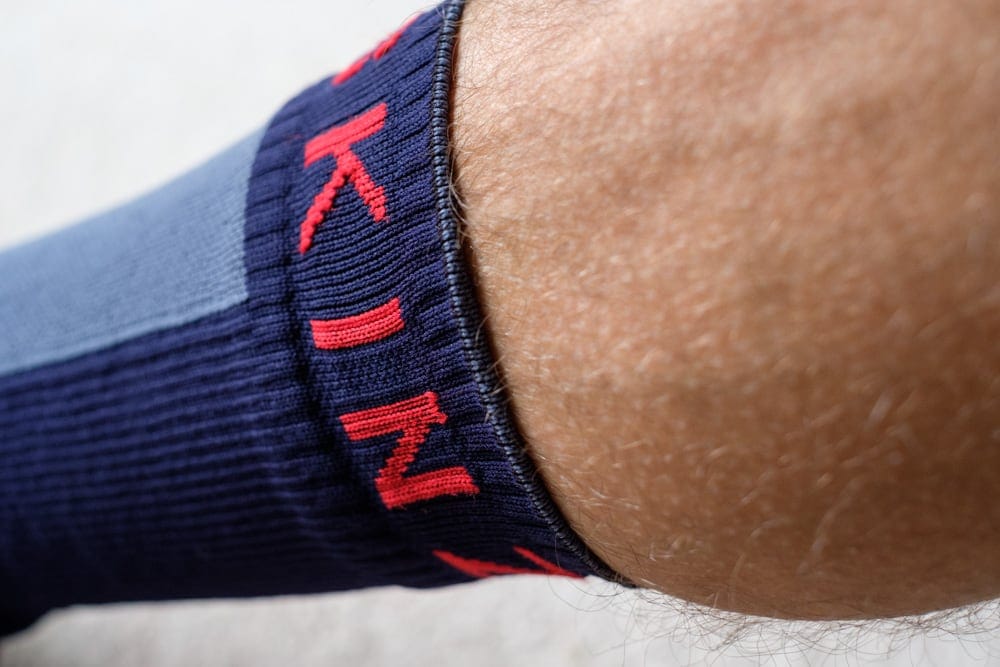 For my test ride I went out on the same 1 hour loop I've ridden several times before and have previously got cold and wet ankles from the mud and water being thrown up by my front wheel. It wasn't wet enough, nor was I out for long enough to fully saturate my shoes, but we know the sock material is waterproof so that doesn't really matter. 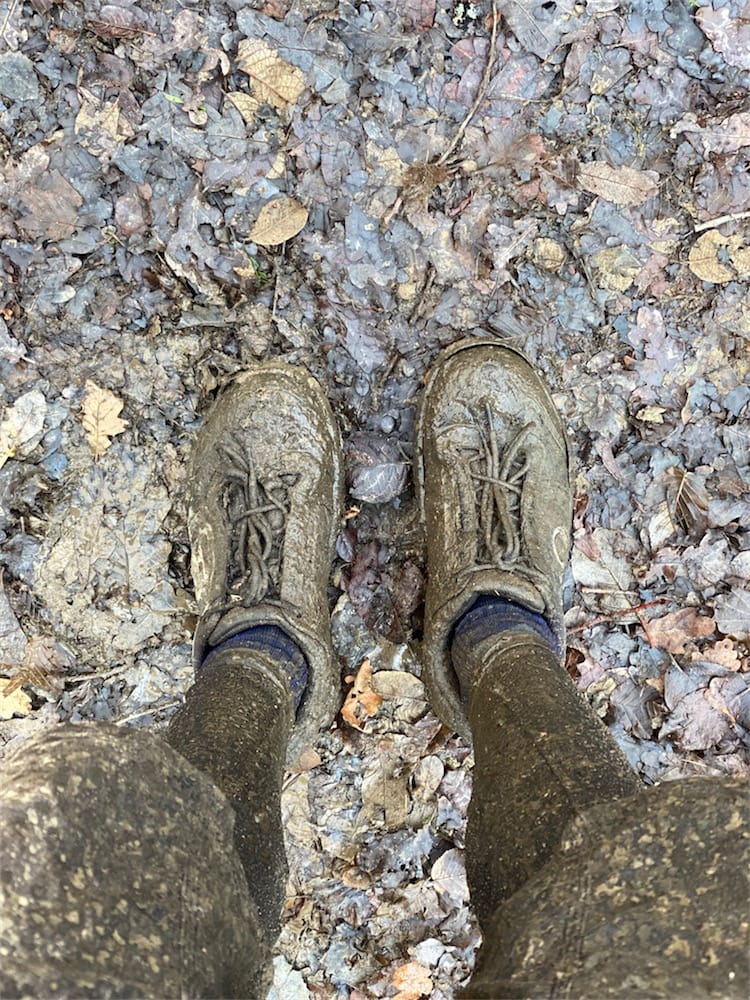 What I will say though it that much like a waterproof coat, the socks will only breathe well if the shoes they are inside aren't completely waterlogged. If the shoe outside the sock is consistently wet, then there's nowhere for the sweat to wick to. If the outer face of even the best quality waterproof jacket is saturated, it won't breathe as well as one that's got a nice fresh DWR coating on the face fabric and the water is beading off. So yes, you may end up feeling like your foot is sweaty, or wetter than you'd like, but this is a most likely a result of the shoe being waterlogged, not the sock not being waterproof.

Another issue I had with my old Sealskinz was they they felt horrible to wear. More like putting a thick, baggy, waterproof bag over your foot than a sock. Happily I can say this is much improved. They have several different materials/thicknesses of sock, so it may still vary, but the type that I got feels perfectly wearable (though still a little weird). I found that the Sealskinz size guide was accurate, but that the sock was loose in some areas when worn and could perhaps do with more 'pre-shaping', though this may just be an issue for my particularly skinny lower legs & ankles. The ankle length sock was longer than I expected, being slightly longer than my Endura riding socks. 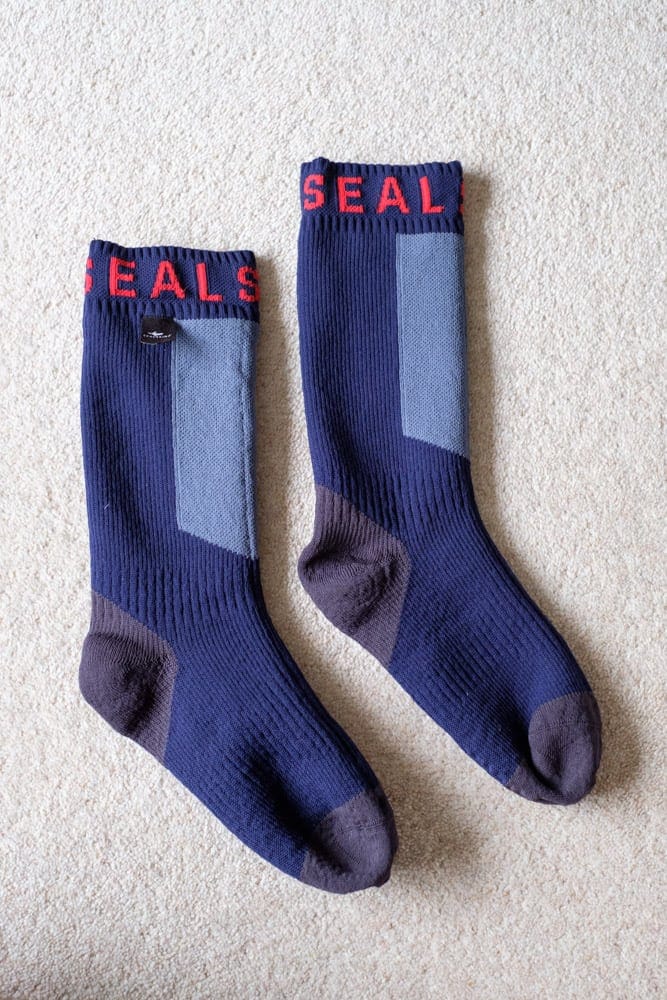 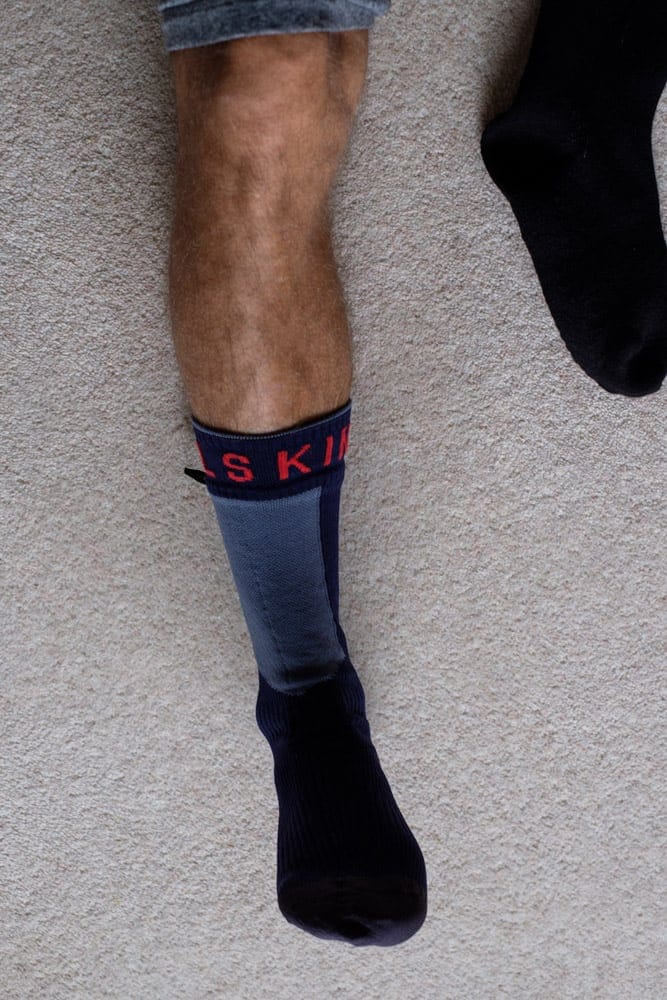 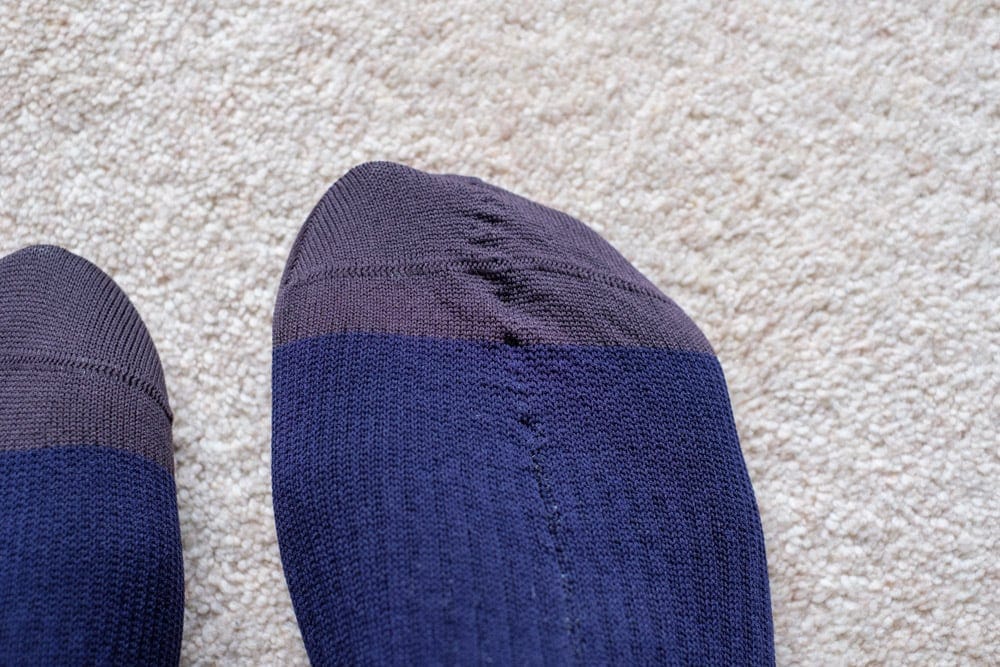 I opted for the 'warm weather' version on the basis that it doesn't routinely get particularly cold in the UK (in the South at least) and I'd like to be able to wear them during the Summer (if it's wet, otherwise it will definitely just be a normal riding sock) and just wear another sock underneath to provide the extra warmth in the Winter. This provides me a good combination of options to use with my ageing 5.10s and prevents the need to buy a pair of Winter shoes, which as I've mentioned are weirdly hard to find for mountain biking (and would also suffer from the same water running down the leg issue anyway).

It took me long time to bother trying Sealskinz socks again, but after many years of just getting cold wet feet on wet rides – whether that's on a Welsh Summers day or an average British day, I decided to give them another try and so far I'm glad I did.

You've got to be reasonable with your expectations, so if you're expecting to have completely dry feet while riding in the rain, with bare lower legs, you're going to be disappointed. You'd need a much better seal around the top of the sock than is practical to get, even with this new "Hydrostop" feature.

But, if you accept that you can never stay 100% dry while mountain biking in the wet because you're moving around and getting rain from above, splashes from below and sweat from the inside, then you'll probably be pleased to have a pair of Sealskinz available, to help keep you a little dryer for a little longer.

Still got questions? Email me and I'll try to answer them (& update the review).