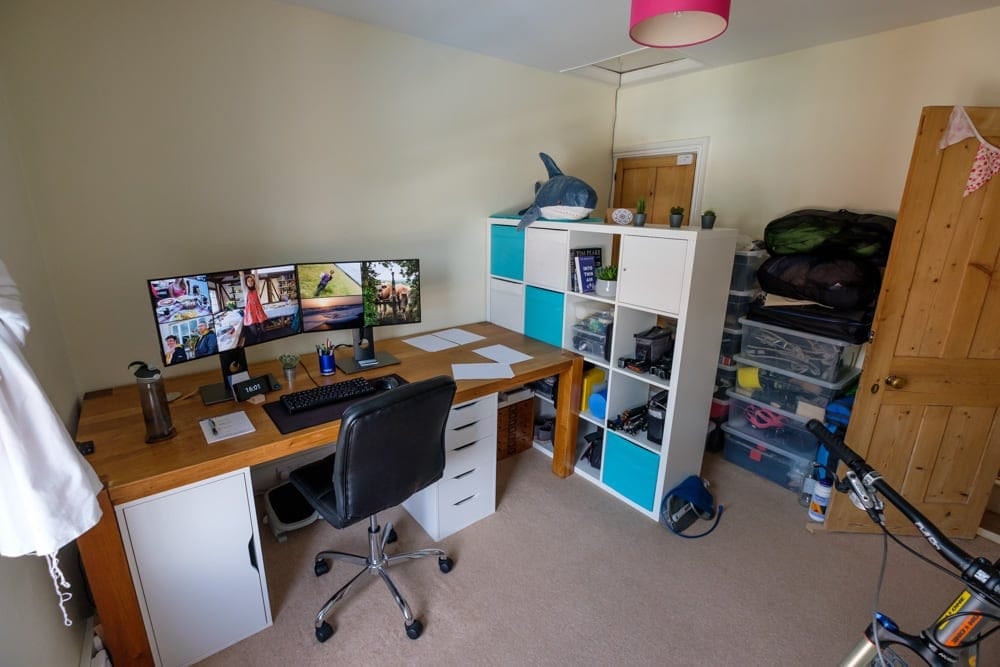 Setting up my Home Office

I made the decision (with my wife's input) to go freelance while we were travelling and was lucky that the house we'd already verbally agreed to rent on our return would have a separate room that I could use as an office.

The room is about 3.5m square with an old chimney breast and two doors, one for access and one for the boiler cupboard. It's a good size for a home office and gave me plenty of options for the layout.

This post gives an overview of my current office set up. There's nothing on the walls at the moment (hopefully more to come on that in another blog post) and it still could do with a bit more tidying but the photos show it as it is.

Initially I set up a desk that we'd had in a previous house, which was built using two Ikea Kallax units and an Ikea desk top plonked on top. This worked fine but the space in between the two Kallax units was too narrow and the overall desk length wasn't quite as long as I wanted.

I looked into buying a couple of Alex cabinets/draw units from Ikea and then getting a length of wooden worktop to go on top. This combo was about the cheapest way I could find of getting a long (2m+) desk with a nice wooden top, it came out to around £300 with a bamboo worktop.

That was the plan until we visited a local charity shop to get a wardrobe and I happened to spot a huge wooden table. The top was damaged and it wobbled badly but with a little fixing it looked perfect and it was only £85! 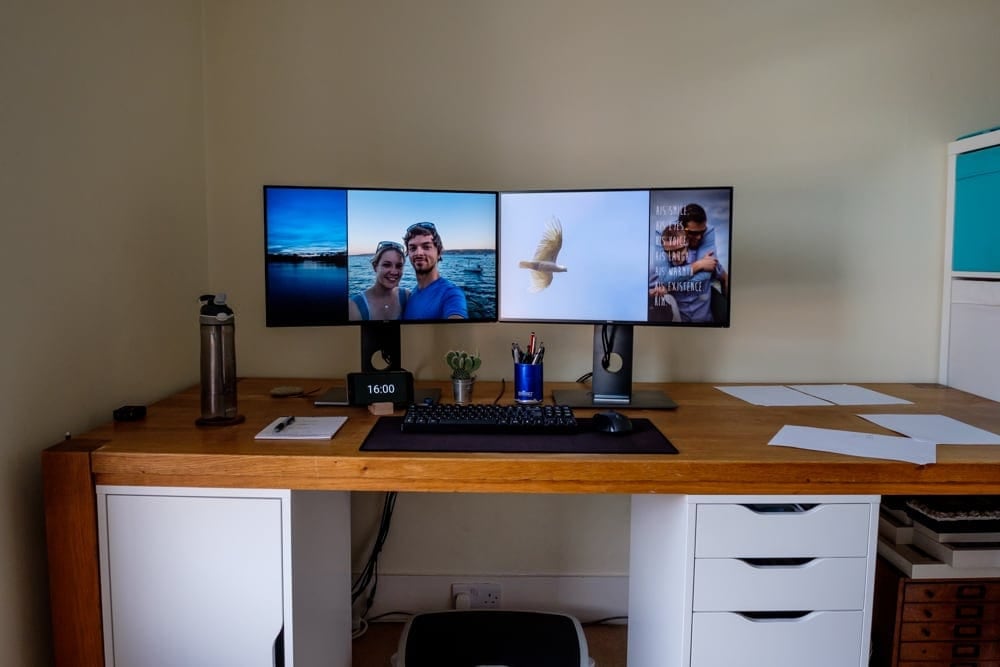 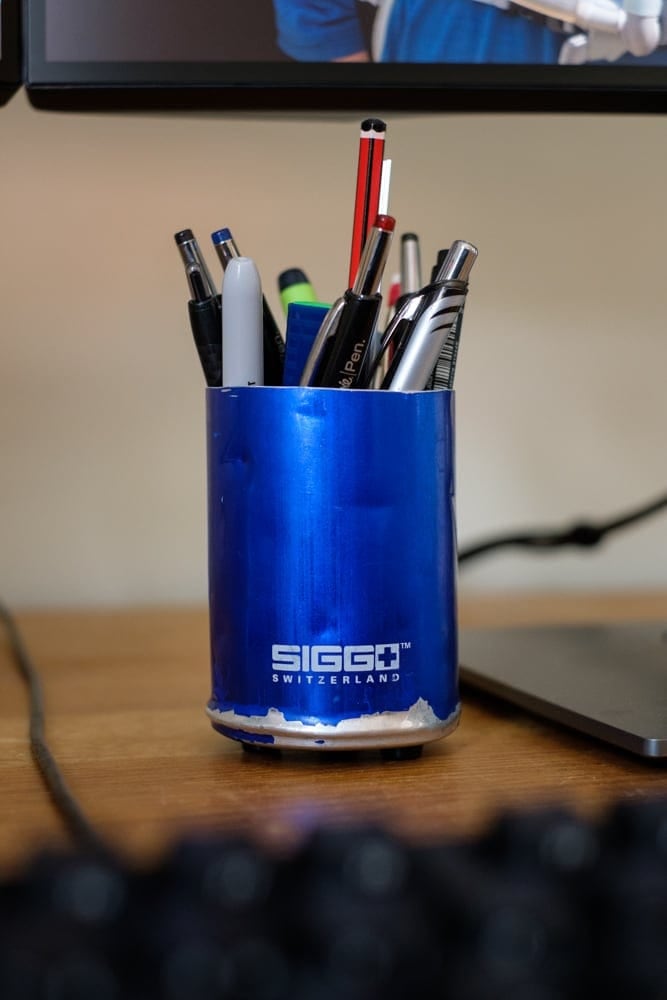 Getting it up the steep stairs in our Victorian terrace was the only issue and our neighbour came round to help me lug it up the stairs. This thing was heavy and it turned out to be solid oak. It sat propped up against the wall for a while until I got around to fixing the broken leg by pouring (a little too much) wood glue into the hole where a retaining fixing used to live and leaving it in there to set.

With the help of our amazing neighbour we got the desk put together, flipped the right way up and positioned in the corner of the room. Where it would now live forever because it's too heavy to faff with moving it! It's just over two metres long and has evidence of its previous life as a kitchen or dining table all over it, which I really like. 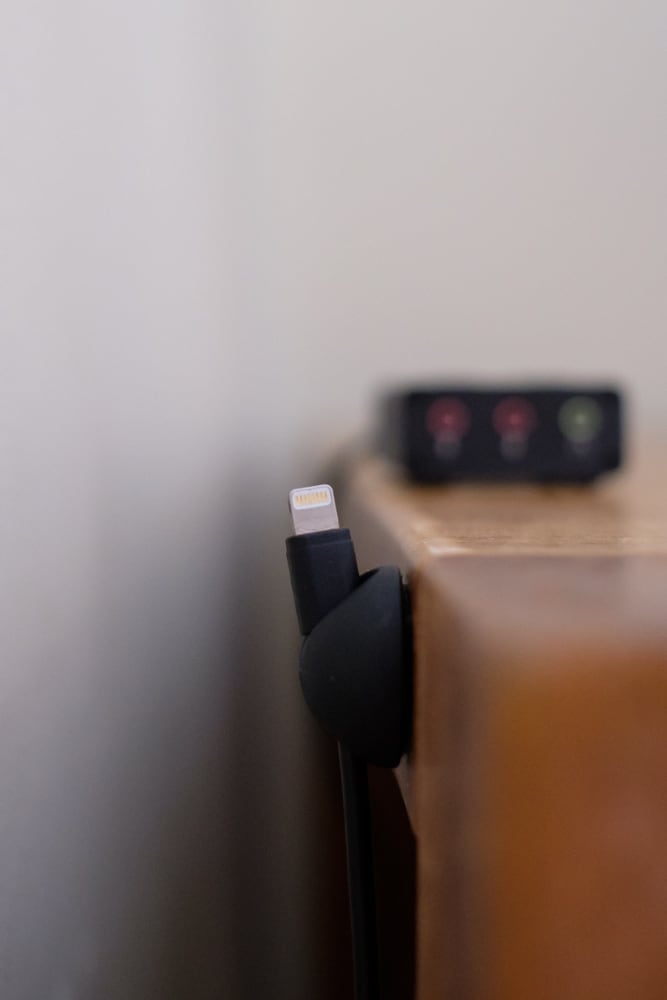 It took me a while to decide on which monitors to get because there are so many to choose from!

I knew that I wanted two (or maybe one super wide) screens, to help with managing multiple uses and applications. I wanted screens that were at least 24" but probably not huge 27" ones and I wanted higher than HD resolution but didn't want to pay out for 4K. I also wanted good stands, good colour reproduction and a small bezel. Oh and I wanted all that for as close to £500 combined as possible. 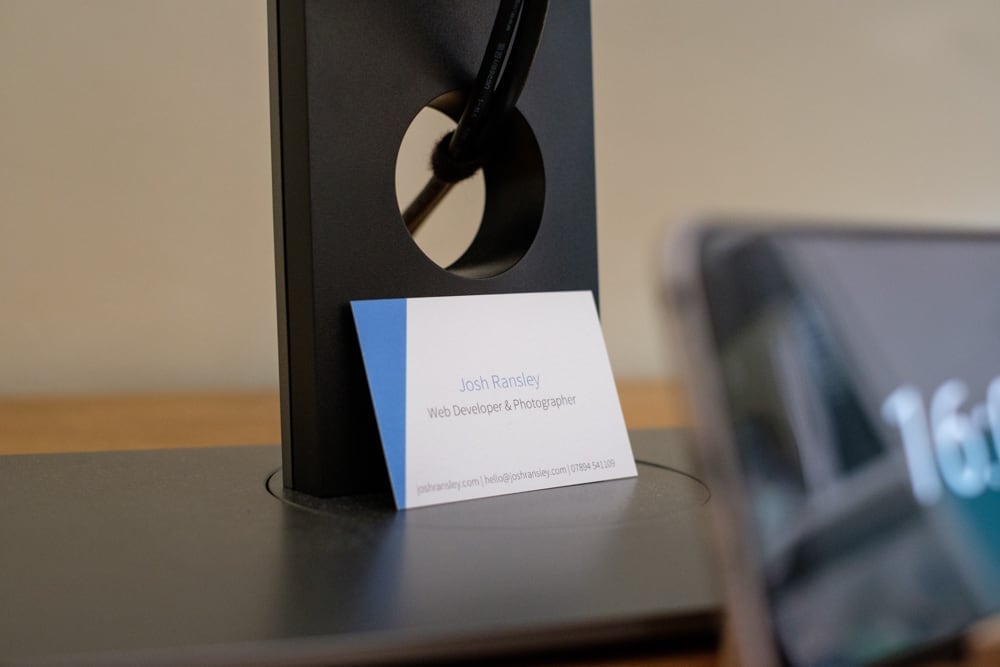 That list of requirements led me to the Dell Ultrasharp U2518D which for two monitors came to under £600 and seemed to offer the best balance of features that I wanted. They're good enough for photo work without going into a crazy high price bracket and they have all the other features I want. Are they the best monitor for the price? I don't know, but they're pretty blooming good.

I've set them up next to each other with the screens angled in slightly and the stands are holding the monitors as high as they can off the desk.

My ailing 2013 MacBook Pro Retina is the powerhouse to this set up. It's been iffy as a laptop for a few years because there's some sort of battery related issue where it forgets it's a laptop and turns off whenever it wants on battery power. I've done everything I can to fix it as well as having an Apple 'Genius' not find anything wrong. So I've just accepted that I have to keep it plugged in, which for my use now is fine.

I have it sitting in an Ikea Alex cupboard on the single shelf they give you (I did ask if they do extras but they don't) and I'm running it in closed lid mode. 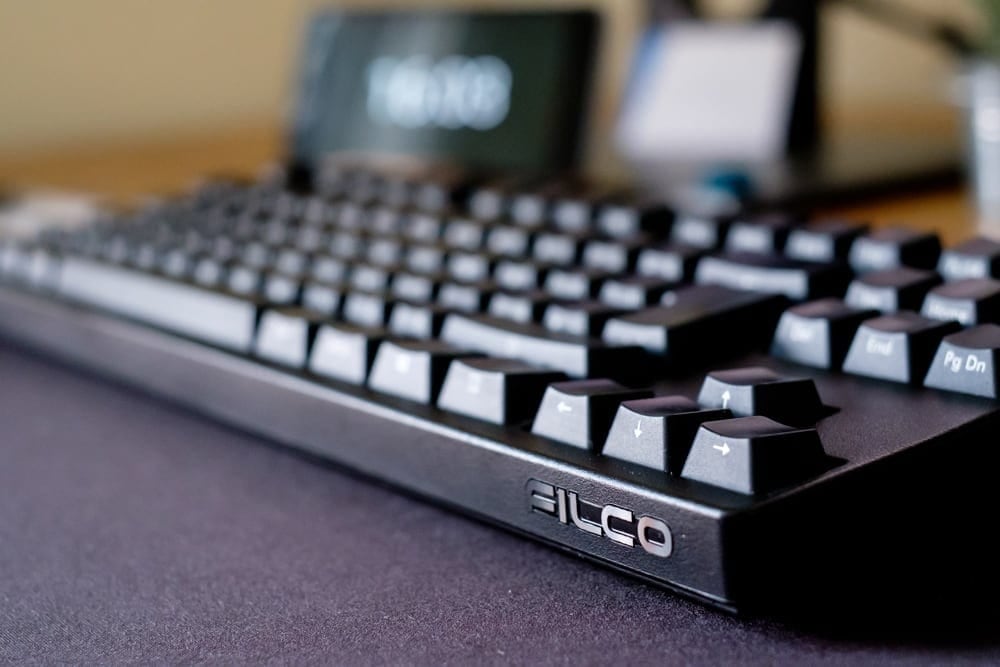 Having it in a cupboard like this means that it heats up pretty quick so I put it up on a stand to get some airflow underneath and took a saw to the Alex cupboard. I cut a big rectangular hole in the back so I could fit a pair of huge 120mm fans running off USB to get rid of all the hot air in the cupboard. This looks a little bit rough around the edges but works very well at keeping the temperature of the MacBook down, even under heavy loads. 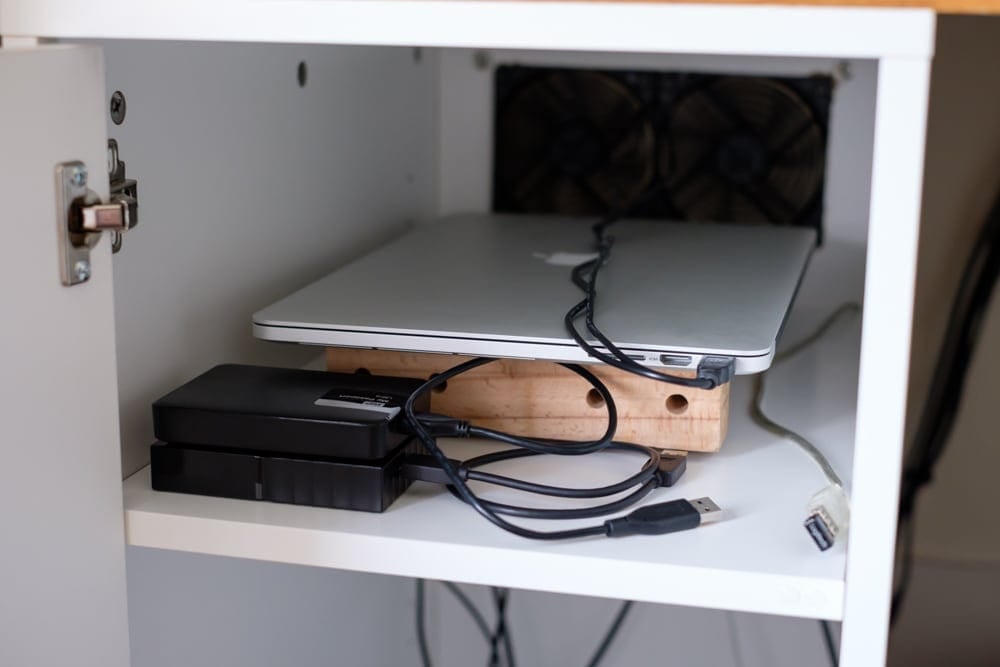 The USB—Ethernet adaptor is doing fine and provides a much more stable connection than using Wifi. I've got a super long Ethernet cable running along to my switch, which I'll get to in a bit. I've also had to finally buy a USB hub, two in fact, to handle all the various USB devices I've got plugged in:

The first USB hub I ordered was a 4 port non-powered one from Anker and while good it suggests not plugging in too many devices which need power. So I ordered a 7 port powered one, also from Anker, to give me space and power to plug in extra hard drives and other random additions like memory sticks. I'm waiting for this to arrive at the moment which is why there's two hard drives just sitting in the cupboard waiting to be plugged in.

The laptop itself is plenty powerful enough for my current usage, with a 2.8GHz i7 CPU and 16GB of RAM it can handle most things I throw at it.

This is where things get a little geeky and unnecessary, if they weren't already. Instead of just settling for using the ISP provided wireless router/modem combo I'm using a few dedicated devices. 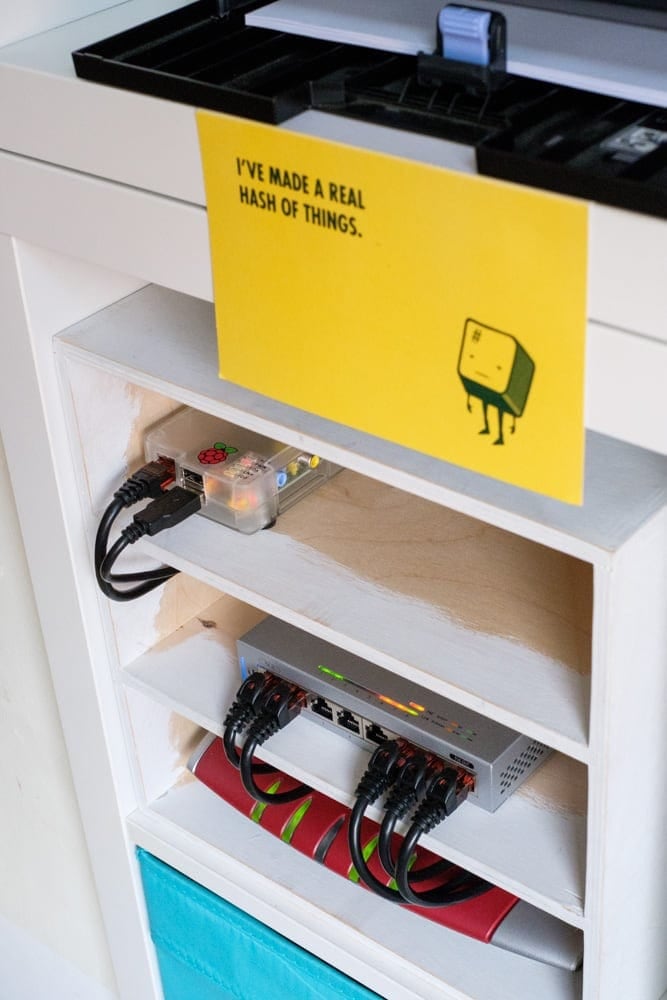 Currently I'm using the ISP supplied FritzBox router/modem but with wireless disabled. Soon I'll also disabled the routing aspect of this box and replace it with a more powerful and customisable pfSense based box. The FritzBox is sufficient for most home uses and small office uses where the person isn't a geek but it doesn't cut it for me.

Currently the FritzBox is plugged into an 8 port Ubiquiti Ethernet switch. This is an addition that most home users won't have in their set up because they don't have many wired devices. For me though I want as many things wired in as reasonable so the switch handles all that.

I'm using five of the eight ports of the switch so far with one port going back to the router and the others going out to my main computer, a Raspberry Pi which is currently hosting a local web server to use for developing websites, a Dell 1350cnw laser printer and a Ubiquiti Unifi Lite AP.

Wifi is handled by a Ubiquiti Unifi Lite AC wireless AP (access point), which is kinda like the ones you see in offices or commercial buildings. Initially I had it placed in the corner of my office which was also the very corner of the house. I knew this wasn't the best place for it so I moved it around the office a bit and ran some speed tests. Then I went up into our loft a couple of days later to chuck some stuff up and found myself wondering if the loft would be better for the AP. So I popped a longer cable on it and took it up to the loft and instantly got way faster and more consistent speeds throughout the house. Where the access point is now placed high up and above the walls it doesn't have to go through walls to get to the rest of the house, just through the ceiling and floor which means that much less of the signal is lost. 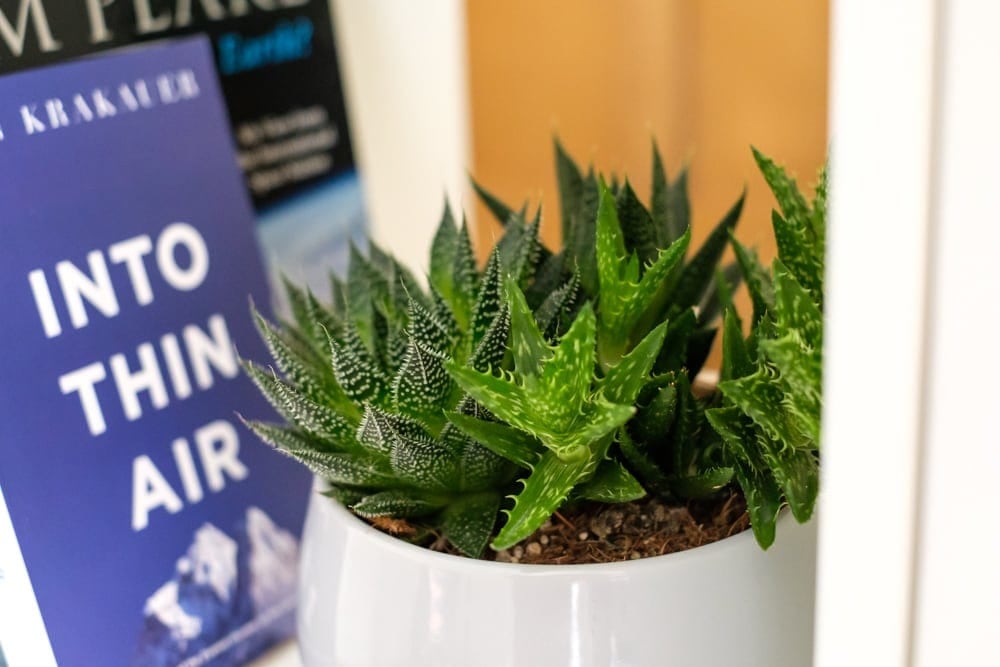 The speed at the back of the house went from around 8Mb/s all the way up to 50Mb/s just by moving the AP to a better location! Not bad. And this speed is now achievable across the whole house. Granted it's not a huge house but like most UK houses the walls are brick, which play havoc with Wifi signals.

Soon I'll be upgrading the Raspberry Pi to a machine that isn't woefully underpowered to use as a development server and something that actually has Gigabit Ethernet. As mentioned I'll also be replacing the routing aspect of the FritzBox with a more advanced pfSense based machine.

I've got an Ikea Kallax 4×4 unit separating the desk space from the storage area. A few plants help the room feel much nicer and I've currently got one of my bikes in here until we get a shed.

I'll be replacing my current desk chair with something actually comfortable soon and am hoping to get a set of speakers as well. 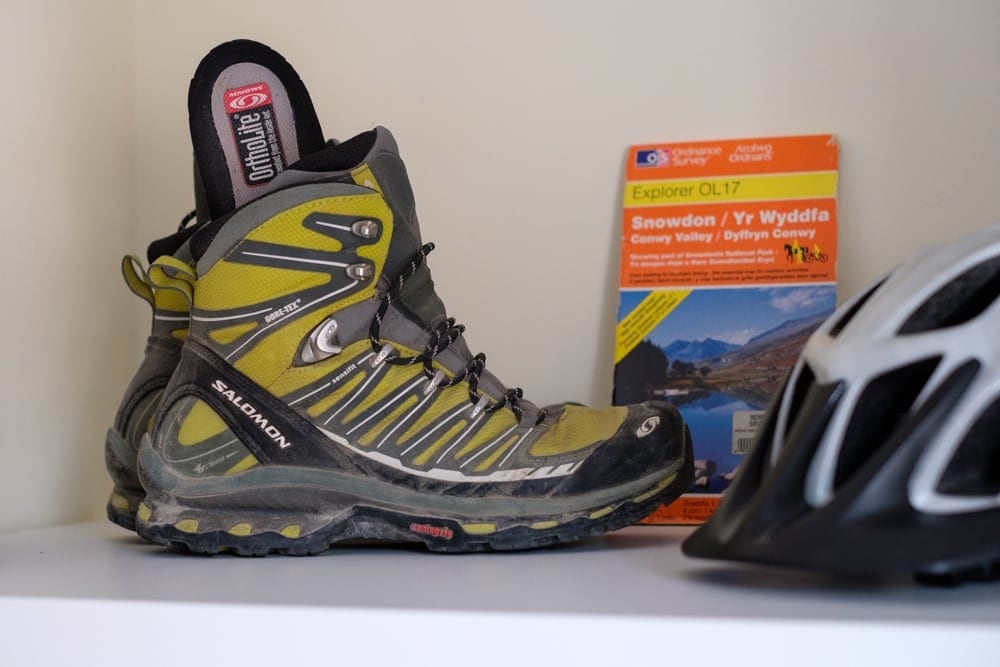 There will hopefully soon be a quite exciting new addition to the office, which I'll write about separately if things go to plan.